In Intuit’s second early report we drill down on the results of Intuit’s Bookkeeping Rates survey based on location.

Before we show you the results in terms of region, population density, and state, please be aware that the size of our sample this year allowed us to do something we have never done before. That is, we will now include our results for all states. This is the first time we have done so. While some states have small samples, we still think the results will be of interest.

NOTE:  For the final, consolidated results and a link to download an Excel file with the tables, see this post on Intuit ProLine News Central Blog.   Download a PDF Intuit’s Average Billing Rates Survey 2011 .

Also before we share the results based on locations, we wanted to update our overview of national results.

We further qualified responses and eliminated a number of responses based on internal inconsistency. As a result, the average rates did shift. Changes are shown below in bold red. The mode value, the most common amount charged, did not change, however. If hourly rates changed, they changed only by a dollar. Changes in fixed fees were by a larger amount. (This is in part because the sample for fixed fees is roughly a third of the size of the sample for hourly rates. A small change in the base for fixed fees has a bigger impact.)

The majority of practitioners charge hourly rates. (Some also have services offered for set fees; see below).

A sizable group of practitioners charge for services by fixed fees. Most of these respondents (but not all) also offer services on an hourly basis.

The regions listed here are those that were commonly self-provided in an early rates survey. It’s entirely possible that different practitioners in the same city might self-identify as being in different regions (such as Northeast and Atlantic). Please cross-check these regional rates and fees with data from the tables organized by state and population density that follow.

The highest rate in each table appears in bolded text.

Population density remains a major factor in what rates are charged.

Population density remains a major factor in what rates are charged. But as we are often asked for specifics at the state level, we are presenting results here as one more data point for you to consider. Please understand samples at the state level are often smaller than the other categories we have presented earlier. You should be more confident about results in the following twenty states, which had the largest number of responses.

Note: Not represented are the District of Columbia and Wyoming. 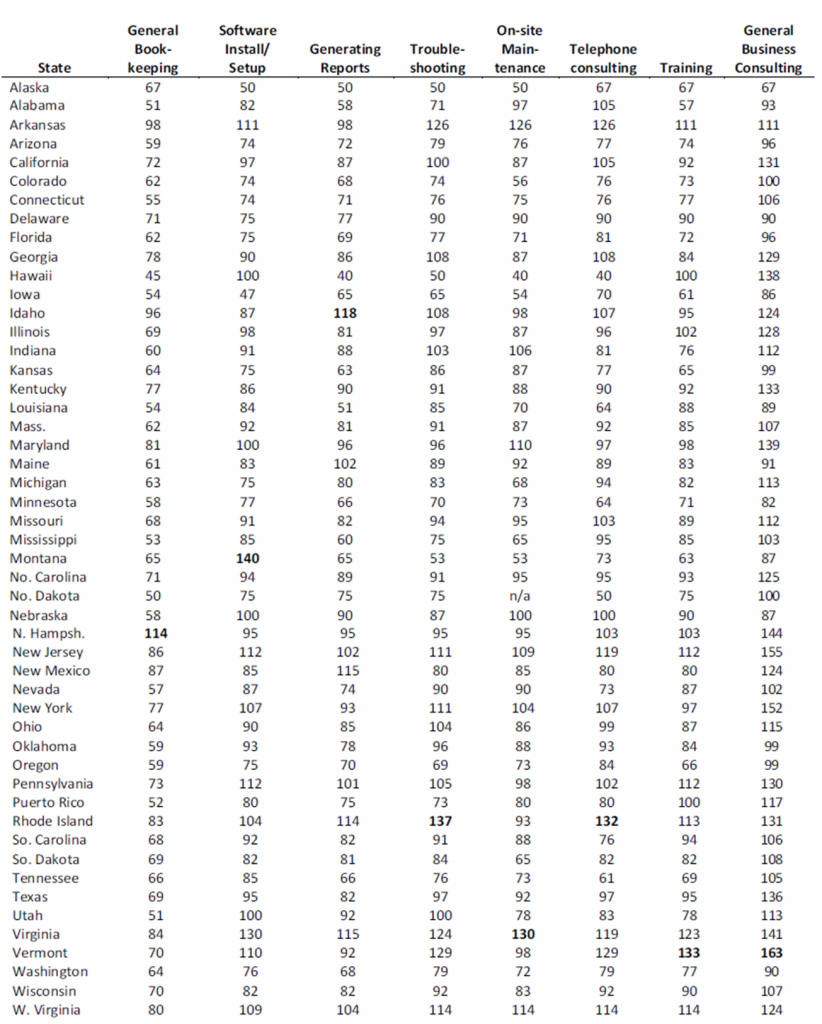 Especially because there are fewer practitioner offering fixed fees than hourly rates, we have a number of states that are not represented: Arkansas, District of Columbia, Georgia, Idaho, Montana, New Hampshire, and Wyoming. As before, the data for some states is relatively thin, so take these amounts with a grain of salt. 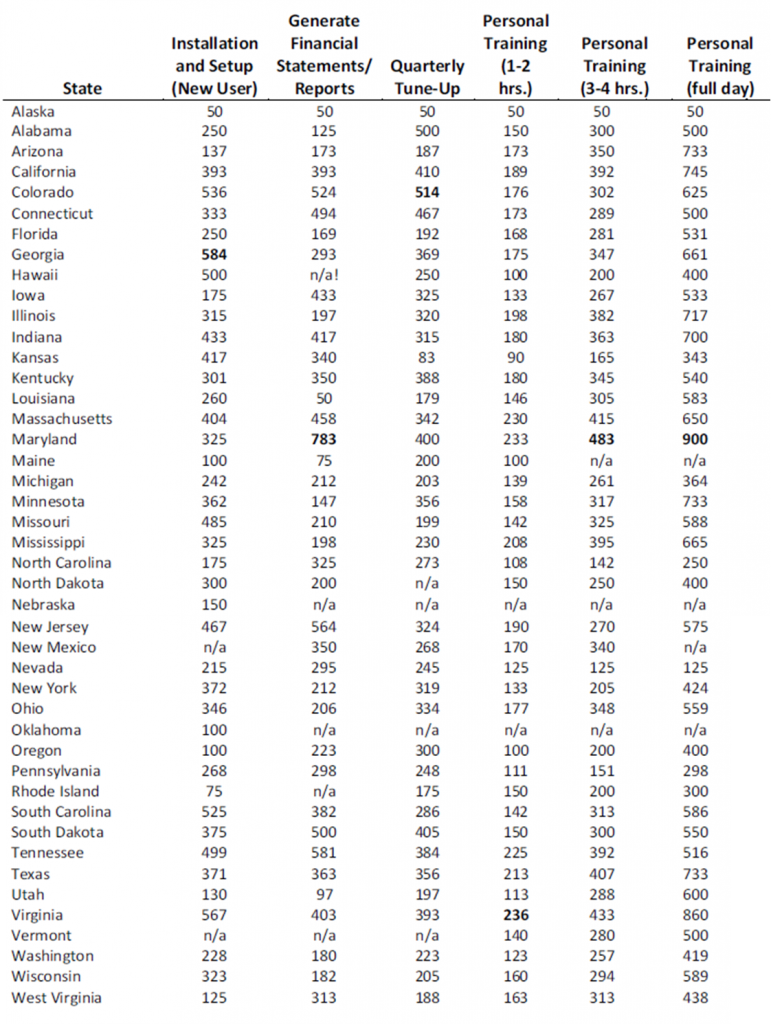 By conducting this survey as an informal, web-based straw poll, we are able to develop a large sample. We believe the results to be meaningful, if unscientific.

To the best of our knowledge, this is the largest ongoing survey conducted among QuickBooks practitioners and others on the rates they charge. We encourage you to use the survey results as one of many data points when you look at how you structure your rates and fees.

Bill Teague is a freelance writer and editor, and former Managing Editor of the Intuit® ProConnection® Newsletter.

As a CPA with an MBA in Entrepreneurship, Michelle Long is dedicated to helping people start and grow their own business.

She is a published author, international speaker, consultant and owner of Long for Success, LLC. In recognition of her dedication to helping entrepreneurs and small business owners, the SBA named Michelle a Financial Services Champion of the Year and Accounting Today recognized her as one of ‘10 Women who Inspire a Profession’. In additions she was named a Top 10 ProAdvisor -- Social Media Leader.

Community Choice for both Michelle & Long for Success Blog